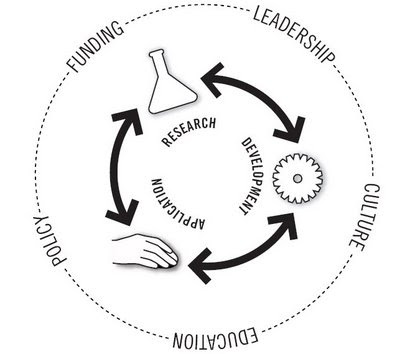 Os reproduzco algunos párrafos significativos del artículo de BusinessWeek:
Venture capitalists’ taste for risk has changed for a number of reasons, including the difficulty of taking tech companies public or selling them for lucrative paydays. The result is that venture firms are putting much less money into tech startups than in the past, and the money they do invest goes into less expensive, less risky deals, including social networking startups such as Facebook, Twitter, Yelp, and Digg. These so-called Web 2.0 companies are creating exciting new forms of socialization, information sharing, and entertainment. But some of the Valley’s old guard are skeptical they’ll grow big and important enough to deliver sizable productivity gains for business and the nation or to produce an upswell in new core technologies. Today’s startups «give us refinements, not breakthroughs,» says Andy Grove, former chief executive of Intel (INTC).

Startups and venture capital are just part of the issue. Federal funding of advanced computer science and electrical engineering research has dropped off sharply since the late 1990s, as has the number of Americans pursuing computer science degrees. And large technology companies are putting less emphasis on basic research in favor of development work with quicker payoffs. «We’re off-balance. Everybody is thinking short-term,» warns Judy Estrin, former chief technology officer at networking giant Cisco Systems (CSCO). She just came out with a book, Closing the Innovation Gap, that’s a call to arms for the U.S. technology sector.
For more than 40 years, Silicon Valley has been the world’s most prolific laboratory for information technology innovation. But Estrin, Grove, and others are growing concerned that the vitality of the Valley, and, indeed, that of the entire U.S. tech industry, is at risk. That could have huge consequences for the future of American productivity, job growth, and national competitiveness. These problems have been brewing for years, but they’ve been amplified by the economic downturn.
Many people in Silicon Valley disagree with the doom-and-gloom assessment. After all, Apple (AAPL) is reinventing the cell phone with its computer-like iPhone, while Google (GOOG) pioneers cloud computing and Intel pushes the envelope in microprocessor design.
But while those concerned about the direction of the nation’s tech economy acknowledge those bright spots, they believe an overhaul is needed. They’re calling for new tax incentives from government to encourage long-term investments in breakthrough technologies, a renewed commitment by large tech companies to basic science, a shift by venture capitalists to bolder bets, and grander ambitions on the part of entrepreneurs.
So is Silicon Valley losing its magic? Or is there another generation of breakthrough technologies that outsiders just don’t know about?

We use cookies on our website to give you the most relevant experience by remembering your preferences and repeat visits. By clicking “Accept All”, you consent to the use of ALL the cookies. However, you may visit "Cookie Settings" to provide a controlled consent.
Cookie SettingsAccept All
Manage consent