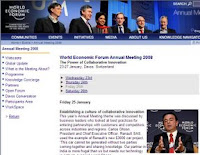 L’edició del World Economic Forum d’aquest any gira entorn de la «collaborative innovation» http://www.weforum.org/pdf/am_2008/executive_summary.pdf , sobre noves xarxes d’innovació. Definitivament, el món de la innovació ja no quedarà mai més tancat en departmens de R+D. Les formes per a generar nous models de negoci innovadors encara són molt inmadurs però els «open business models» de Chesbrough, «l’Open Innovation» en general, http://www.openinnovation.net/ és una gran oportunitat per a nous creixements empresarials. Esperarem per si de Davos surt alguna idea suggerent, de moment us reprodueixo el resum executiu de la sessió dedicada a collaborative innovation:
The Power of Collaborative Innovation
• Jacques Aigrain • Carlos Ghosn • Thomas H. Glocer • Mark G. Parker • Hector de J. Ruiz Chaired by • Steve Adler Friday 25 January
Hector de J. Ruiz, Chairman of the Board and Chief Executive Officer, AMD (Advanced Micro Devices), USA, said his company’s alliance with IBM has been a shining example of collaborative innovation, but it took time for the two firms to “fall in love”.
“I believe that it is a very successful example of collaborative innovation, but it took years,” he said of the alliance, which was first formed in 2002.
Ruiz said that trust is the key element in building an inter-corporate relationship. Once initial trust has been tried and tested, it is possible to move to a higher level. “With IBM, it was initially narrow, then it broadened. We learned that, by restricting cooperation, we were making it difficult to initiate things,” he said.
Carlos Ghosn, President and Chief Executive Officer, Renault, France, and President and Chief Executive Officer, Nissan, Japan, said that the successful link-up between Renault and Nissan was forged through innovation because “there was no textbook” for how the alliance ought to function. The key to its success was the existence of a shared strategy, he said. “Without a shared goal, diversity is a handicap,” he stressed.
For Mark G. Parker, President and Chief Executive Officer, Nike, USA, there has been a profound change in the relationship between corporations and their consumers, which has turned into more of a dialogue. “There has been a shift in the power of the consumer,” he said. But these changes present more of an opportunity for a company than a threat.
On the question of alliances, Parker said that even if the relationship does not end in marriage, much good can emerge from it.
Nevertheless, all collaboration between companies involves a trade-off, with each side needing to know exactly what it stands to gain, said Thomas H. Glocer, Chief Executive Officer, Reuters, United Kingdom. “If you own 100% of the next incredible idea, you are not going to phone around your friends with it,” he remarked. “But on balance, you need to have a healthy collaboration in your corporate toolkit.”
The question of intellectual property can present problems in any corporate relationship and sometimes it is necessary to make clear what can and what cannot be shared, Ghosn noted.
But collaborative innovation is a concept that extends beyond the relationship between corporations to include a company’s approach to its own employees and the attitude of those employees towards their work, the panellists said. Jacques Aigrain, Chief Executive Officer, Swiss Re, Switzerland, said that old companies, such as his own, face a day-to-day battle to continue innovating.
We use cookies on our website to give you the most relevant experience by remembering your preferences and repeat visits. By clicking “Accept All”, you consent to the use of ALL the cookies. However, you may visit "Cookie Settings" to provide a controlled consent.
Cookie SettingsAccept All
Manage consent

This website uses cookies to improve your experience while you navigate through the website. Out of these, the cookies that are categorized as necessary are stored on your browser as they are essential for the working of basic functionalities of the website. We also use third-party cookies that help us analyze and understand how you use this website. These cookies will be stored in your browser only with your consent. You also have the option to opt-out of these cookies. But opting out of some of these cookies may affect your browsing experience.
Necessary Siempre activado

Performance cookies are used to understand and analyze the key performance indexes of the website which helps in delivering a better user experience for the visitors.

Analytical cookies are used to understand how visitors interact with the website. These cookies help provide information on metrics the number of visitors, bounce rate, traffic source, etc.

Advertisement cookies are used to provide visitors with relevant ads and marketing campaigns. These cookies track visitors across websites and collect information to provide customized ads.

Other uncategorized cookies are those that are being analyzed and have not been classified into a category as yet.